I’ve been wanting to eat red velvet cake for the longest time. Am too lazy to whip one up. In case it may not taste good. And I only really want to eat one. What’s more, you don’t usually find them in bakeries. Till recently. Apparently it has gain a lot of popularity lately. And with christmas around the corner, red velvet becomes a popular menu (since it’s in theme with christmas colors – red, green and gold).

Anyway, recently I had the chance to go to Subang. I’ve been reading and told about this popular red velvet from the whisk. I wasted no time a grabbed one. And coincidently, Coffeebean is also promoting red velvet cake this Christmas and there is an outlet where the whisk is. I decided to do a comparison. But to my disappointment, they said that their stock has yet to arrive. “But we have red velvet cupcake”. And I thought, oh, why not. It’s still cake.

So here we have.

And my verdict? Let’s compare first. 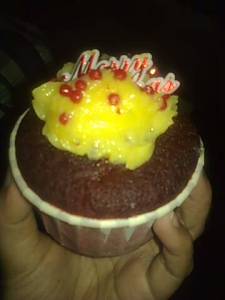 Verdict?
For the cake, I’d go for the whisk. It’s moist and really tastes homemade. But cream cheese would really heighten the taste. And in whisk’s frosting you can barely taste the cream cheese plus, it is too sweet for me. It’s a big slice though, its portion I think is equivalent to 2 CB cupcake.

CB’s cupcake would have been nicer if it’s slightly more moist and a little bit more cocoa. But the cream cheese frosting is perfect, if only they weren’t too stingy and put more. And it terms of price, I would definitely choose this over the other. I wonder how the slice cake would actually compare, though. And it’s only RM7.90 (before tax).

The guy at CB was right too, you have to heat the cake up to do justice to it. I put both cakes in the microwave oven for 15 sec and seriously, sedaaaap.

Anyway, I had always imagined that red velvet cake would taste like moist chocolate cake. But, not exactly. Plus, eating it means now I’ve got red coloring all over the place and my clothes where the crumbs fell. Guess, red velvet cake is really not my slice or cup of cake. For now.

8 thoughts on “A Red Comparison”